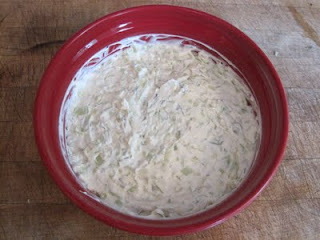 We have a cookbook in our collection called, "The Best Book of Greek Cookery," by Chrissa Paradissis.  It's annotated on the flyleaf, "Bought on the ship Stella Maris, June 26 - 73 in Greece," in my grandmother's precise handwriting.  Jean Cioran was a world traveller, cook, baker, and and talented crafter of stained glass, fabric, and metal, all packed into a five foot tall, ninety-eight pound package.  Recipes from the book prepared by her hands served as my introduction to Greek food as a child.

Thirty-eight years down the road we find ourselves living in Greektown on the Danforth, home of hot and cold running Greek restaurants, supermarkets, and specialty stores, which makes cooking out of this little gem as easy as can be.  My daughter loves tzatziki as much or more than she does guacamole, and so yesterday Aija and  I prepared a batch from my grandmother's modified recipe for, "Cucumber Dip, or Tzajiki."

To make this recipe my grandmother had to make and press her own yogurt, I can go to the corner and buy it from a Greek lady not so dissimilar from her, all things considered. 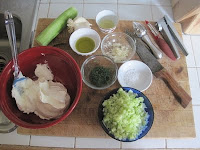 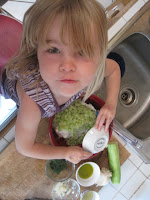 Chill overnight to allow the garlic to mellow and serve with pita, roasted meat, fish, or vegetables, or crudites.

Jean would always ask if you wanted more when you were done a helping.  If you said no she would look hurt and say, "what, you didn't like it?"
Posted by Unknown at 11:32 AM