We take a slightly simplified approach to pickling in brine here on Cavell avenue.  In particular, we find that processing your brined pickles takes away the better part of the crunch and freshness that makes pickling fresh vegetables worthwhile.  So, we have a slightly modified approach that has been very successful over the years; we have lost one jar of pickles to a failed seal and bacteria out of several hundred over the last three years.  We have also streamlined the process to make it faster, allowing larger quantities to be produced in less time. 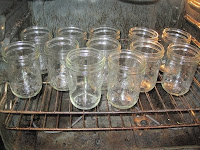 After washing the jars by hand or in the dishwasher, we sterilize them in the oven.  Simply put the jars in at 235 degrees for at least ten minutes and they'll be ready to go without the trouble of fishing them out of a boiling water bath.  You can also fit a lot more in the oven, as the picture shows.  It also reminds me it's past time to clean the oven! 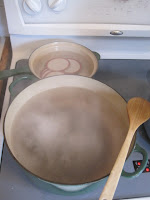 Always use 2 part lids and rings, or new one piece lids to seal the jars.  Put them in a pot of water at just under medium heat (in a lid holder if you have one) to prepare the seal.  When you have filled your jar with the pickles, seasoning, and brine, simply put the hot lid on, fingertip tighten the ring and put it on a wire rack to cool.  You will find your jar is almost guaranteed to seal, and simply pop the rare one that doesn't in the fridge.  It will be ready to eat in a month.  Another advantage of this technique is that headspace is less of a concern.  As long as you cover the pickles and leave approximately a quarter inch at the top and you're good to go.

The better the pot you use the faster it will bring the brine to a boil and the better your control of the temperature.
Posted by Unknown at 6:03 PM