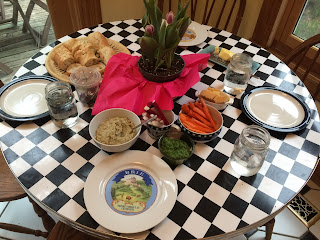 Evergreen Brickworks held their first outdoor market today.  If there was ever a sure sign of spring this is it.  Market-goers, cyclists, runners, hikers, and dog-walkers were only a few examples of those who took advantage of a lovely day to get away in the valley. Suzy, Aija, Nyls had a bit of an adventure and trekked up the west bank trails before we descended on the market.  The farmers we habituate: Ben Sosnicki of Sosnicki Organics, Mark Trealout of Grass Roots Organics, Jim Hayward of Haystrom Farms, and Jens Eller of Marvelous Edibles, patiently endured being interrogated by Aija on what type of soil they had at their farms.  Jessie Sosnicki had great news as well; she's expecting their third baby!

Once we were done catching up with the people who've provided so much of the food we enjoy we picked up a few of the early arrivals as well: radishes, lettuces, baby kale, spring onions, carrots and various other treats.  They all ended up on the table for a simple dinner with a couple of things I whipped up.  Kale Pesto and Chick Pea and Quinoia Hummus accompanied a St. John`s Bakery baguette, a cheddar from Ruth at the Montfort Dairy all accompanied by wild ramps foraged by Seth Goering from Forbes Wild Foods.  All in all a perfect start to what finally seems to be spring!


What did you make on this lovely day?
Posted by Unknown at 5:12 PM