A Funny Thing Happened on the Way to the Fondue Pot 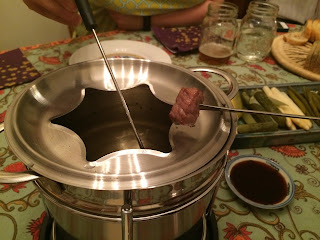 When I was a boy the fondue pot would often appear when my parent's closest friends visited. Savoury fondues of cheese or meat accompanied by good wine and better conversation were the norm.  We would be arranged carefully around the table; men and women in alternation. The excitement ran high when a piece of bread went astray in the pot.  The men would rise to refill the glasses if the errant crumb was theirs.  My mother would always laugh nervously before she kissed the man next to her despite having known them all for decades. 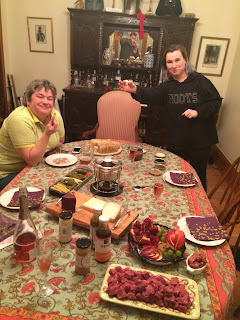 Somewhere along the way the fondue pot fell by the wayside.  The last time I can recall seeing the simmering away on the table was in the eighties.  I am fairly certain Flock of Seagulls was still popular at the time. It just softly and suddenly vanished away, never to cross my mind again... Until this morning.  Toby Stevenson and I had planned an afternoon to experiment in the kitchen while Suzy and Toby's wife Lisa took the boys to the hockey game.  Suzy and I were discussing what Toby and I might make over tea this morning when the word appeared.  Fondue. The word was good. It bore with the scent of smoky cheese, beef simmered in oil, and echoes of laughter.

If only we had a fondue pot. Suzy opined that Toby and Lisa would have one if anyone did. I texted Toby.  No luck! Undeterred, I set a menu.  It was too early to call, but IQ Living was certain to have a pot for us!  That afternoon Toby and I set forth.  The Liquor Store was first. The Meat Department was our next stop for their excellent local grass fed beef.  We ordered a couple of pounds of sirloin cut into small cubes.  The trip got better when they offered us a half pint of local ale while we waited for the meat to be cut.  Then it was off to Alex Farm Products to sample the new arrivals and pick up a piece of cheese. IQ Living set us up with a fondue pot as expected, and also let me know that Suzy and I had a hundred dollar credit on our account.  The day kept getting better and better! 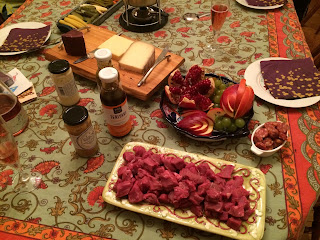 Back at the Hotel Cavell Toby and I cleaned up and prepared the food and equipment.  The boys were fed and went off to play, and we set our plan in motion. The table was set.  Pickles, fruit, sauces, bread and cheese were laid out to accompany the pot of simmering oil and cubes of fresh, red, local beef.  We talked. ate, drank, and were merry. Memories of other times and other friends were refreshed by the laughter and scent of beef in hot oil.

When we had all had our fill and the table was cleared I called me parents.  My mother, Sylvie, answered the phone. "Guess what we had for dinner!" I said.

"Guess what we're having for dinner!" was her reply.

It was indeed.  Coincidence though it may be, my heard grew light with memories of good times past and present.  Some things are as good as you remember.

P.S. I could not help but notice how long it has been since my last post. It is good to be writing again after a long hiatus, and I hope to share more in the weeks to come.
Posted by Unknown at 6:56 PM