While life continues to be busy, better busy than bored I say! 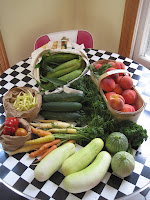 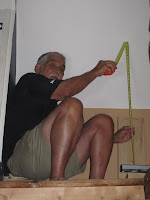 My father, Nick, was down over the weekend and we had our noses to the grindstone renovating the Hotel's loft to make it both more fun and a bit safer.  It was a hard weekend's work, but between framing, drywalling, crib assembly there was time for a little bit of fun in the kitchen.  Nick brought five generous quarts of organic Nova raspberries from Pat Brooking's Annan Way Nursery outside of Owen Sound.  Some ended up in our bellies, some frozen for winter, and some became one of Aija's favourites, raspberry jam.  A trip to market turned up some lovely things, particularly white cucumbers from Potager du Kanada.  An experimental Greek-themed fritatta turned out to be a huge hit, and the fresh pickles were finished off.  We also had a nice roast chicken dinner with Suzy's folks on Saturday night to add a convivial turn to the weekend.

﻿
﻿﻿
﻿
Suzy was in particular thrilled by big effort of the past few days; decanting the fermented pickles.  No more would the house smell like pickles...  better than sauerkraut admittedly, but it does wear on a soul.     Fermented food can be quite lovely, but I always feel a bit trepiditious as I pull it out, particularly after a batch of whole heads of cabbage went off last year.  The resulting mess was a disgusting experience, and I probably would have required professional counselling to help deal with the shock if I wasn't made of sterner stuff. 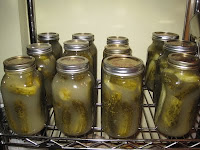 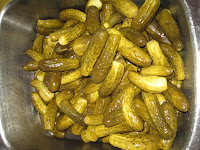 They pickles had been in the pot for three weeks, and they smelled like... pickles.  A quick inspection showed that they were still sufficiently firm, and had turned a lovely variegated olive green, so out they came.  The canning gear got set up with a little help from Aija, and then after she was off bed Suzy and I laid up a dozen jars -  thirteen litres in total.  A yeoman's work on a school night, but you have to do it on the pickle's schedule.  This morning all the jars showed a firm seal, so we're holding to a 100% success rate so far this year.

The bad news is that Ben Sosnicki's cucumbers didn't turn out, and we're going to have to find another source to make sure we can get up to target...
Posted by Unknown at 10:52 AM