It was Taste of the Danforth weekend here in Riverdale, and most residents of the neighbourhood were doing their best to avoid the insanity going on in Greektown.  By insanity I mean a street packed with humanity waiting in line to pay three dollars for a traditional Greek cob of corn dipped in butter... At least I hope it's butter... 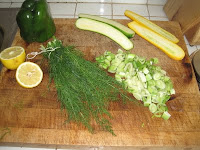 But around the edges life goes on, and as usual there were many nice and colourful things to be had at the market for about the same price as the aforementioned cob of corn, including purple potatoes from Dave at Haystrom farm, garlic and black  tomatoes from Ben Sosnicki, Purple Haze carrots from the Singhs, a perfectly white eggplant (in a beautiful display of three year old logic Aija asked if she could have some eggs the eggplant laid despite knowing all about chickens), a summer sausage from the Webers, and last, but not least, some green and yellow zucchini and young fennel from Laurel at Small Potatoes. 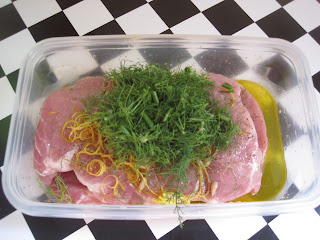 My Saturday dinner plan was pork chops marinated in lemon and fennel, and I was going to experiment and make up a fennel, lemon, and caper topping for the chops, with sides of baked zucchini with balsamic vinegar and parmesan cheese, and a fresh cucumber and tomato salad. 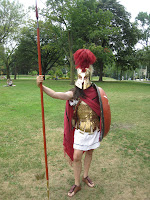 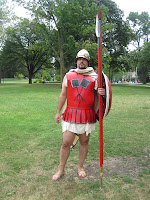 Despite a kitchen witch to help ensure everything turns out, it was a troubled day from the start.  The tupperware with the marinade turned out not to seal terribly well, and I spilled olive oil and lemon juice all over the kitchen table.  After, despite some misgivings my friend Christian and I were going to join two other friends at Taste dressed as hoplites to advertise the upcoming re-enactment of the 2500th anniversary of the battle of Marathon in Marathon, Greece.  We and our daughters kitted up and marched off only to find that due to some mix-up the others had been escorted off by the police, and we made a strategic retreat to settle Aija down for a rest and eat fresh pickles and drink lemonade. 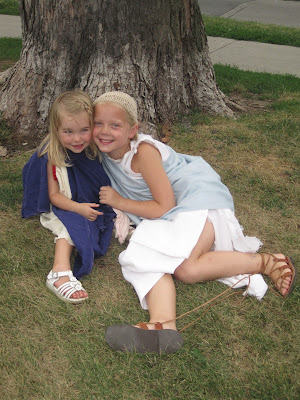 The third and final failure was the fennel, lemon, and caper topping.  I botched the lemon quantity, and it was quite honestly dreadful.  A sad waste of some lovely fennel.  Fortunately, everything else turned out well, and we had a lovely dinner to wrap things up for the day.
Posted by Unknown at 3:49 AM