We've been mashing up beef stew recipes for years until our recipe is a little bit Julia Child, part Joy 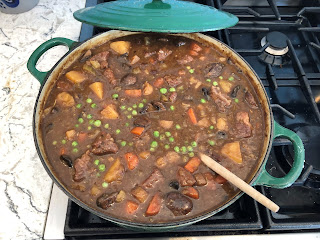 of Cooking, a taste of Irish Stew, a trick from here and there, and part whatever happens to be in the refrigerator. Two tricks that we don't often see elsewhere are frying the onions in tomato paste to enhance the and grating an extra potato in as a thickener. Try it for yourself, I suspect you'll like the results!

Fry:
3/4 lb of whole bacon cut into lardons
in a large dutch oven over medium heat until crispy and the fat has been rendered. Remove with a slotted spoon and save the fat. Toss:
4 lbs of stewing beef cut into 1 1/2" cubes
in a large bowl with:
4 tbsps of flour
1/2 tsp of salt
1/4 tsp of fresh ground pepper
and brown in the dutch oven in small batches then remove to a bowl. Add additional oil if neccessary and saute: 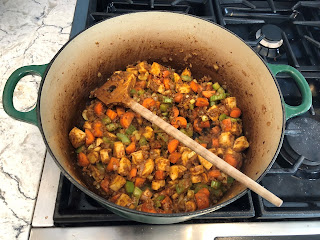 6 small onions chopped fine
1 head of garlic, crushed
until lightly browned, 5 minutes. Add:
1/4 cup of tomato paste
and saute for 5 more minutes.  Add
4 large carrots cut into bite sized rounds or halves
2 large parsnips cut into bite sized rounds or halves
3 large stalks of celery halved lengthwise and sliced
and saute for 5 more minutes. Add some of
2 16 oz bottles or cans of stout or dark beer (preferably local)
and scrape the bottom of the dutch oven to remove any crusty bits before adding the rest of the beer. Bring to a boil and boil for 2 minutes, then add back in the beef, bacon, and add:
8 large yellow fleshed potatoes, peeled and cut into one inch cubes
4 bay leaves
2 tsp of thyme
2 tsp of rosemary
2 tsp of salt
1/4 tsp of pepper
Return to a boil then reduce to a slow simmer. Simmer partially covered for two hours, stirring every fifteen minutes.  In a frying pan over medium heat melt: 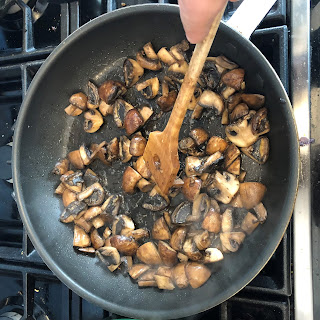 2 tbsp of unsalted butter
2 tbsp of olive oil
and wait until it clarifies.  Add:
1 pound of cremini mushrooms (quartered if they are large)
a little salt and pepper
and saute until they give up their water and the mushrooms have browned. Remove from the heat. Wait until fifteen minutes before the end and add the mushrooms back in and add:
1 cup of frozen peas
Serve hot over mashed potatoes!

While you may not need another beef stew recipe, I had so much fun making today's batch I had to share, particularly as I made it with The Muddy York Brewing Company's award winning Stork Derby Stout. Enjoy!
Posted by Unknown at 11:50 AM